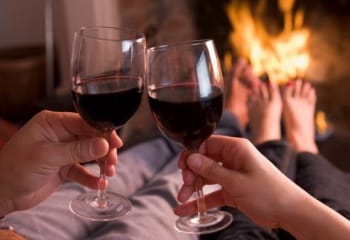 Movies for a romantic evening

A romantic evening is always a pleasure to spend at home. After a light dinner by candlelight, it’s so good to sit comfortably on the sofa, dim the lights, turn on the appropriate movie for the occasion and enjoy each other’s company.

Time-tested films are suitable for watching together at home. France, of course, remains the leader in love romantic films. A romantic comedy by Jean-Pierre Genet "Amelie" is very good for an evening together, where the magnificent Audrey Tautou is looking for her love.

In 2007, she starred in another romantic comedy, Pretty Fatal. Film directed by Pierre Salvadori. In the picture, the life paths of the hunter for rich men, the beautiful Irene, and the simple guy Jean, are intricately intertwined.

A slightly unusual but very interesting film “Look at me" was directed by Agnès Jaoui in 2004. The main character, a 20-year-old girl, really wants to become an actress, is in love with a classmate and almost misses true love. When watching the movie, you will enjoy the great acting, beautiful music, smart jokes and beautiful views of the French countryside.

The original film by Luc Besson "Angel A" is suitable for a romantic evening. He talks about the love of not the most exemplary man and an angel. Love has its own rules.

The fact that love usually does not come from there and not when you expect it, will be told by the magnificent film by the German director Wim Wenders "Sky over Berlin".

Many interesting love stories are filmed in Hollywood. Very sweet and kind films with Meg Ryan are perfect for a romantic evening: When Harry Met Sally, Inner Space, Sleepless in Seattle.

A romantic evening will be well complemented by Garry Marshall’s film "Pretty Woman" about the love of a prostitute and a wealthy financier. Julia Roberts and Richard Gere are great in their roles.

The fact that you can’t run away from love is told by Nigel Cole’s melodrama “More than Love” with Ashton Kutcher and Amanda Peet.

Love conquers even death. This is told by the kind and romantic film directed by Mark S. Waters "Between Heaven and Earth" with Reese Witherspoon in the title role.

And, of course, many beautiful romantic films were shot with the handsome Johnny Depp. In "Pirates of the Caribbean" there is everything that is interesting for two – adventure, love, humor. The film “Don Juan de Marco” tells about the fact that in life there is always a place for fantasies and dreams.

An interesting and unusual film "Chocolate" starring Johnny Depp was directed by Lasse Hallstrkm. Two independent people in life find themselves right next to each other. Together with Depp, the beautiful Juliette Binoche starred in the film.

“Golden Actresses” of the Golden Age