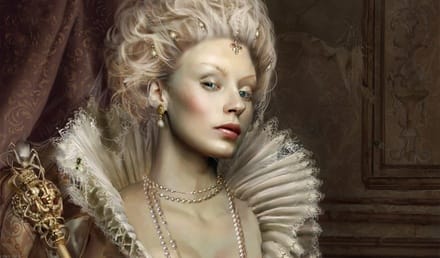 Irina wanted to see how nasturtiums, asters, dahlias wake up. It seemed to the girl that the flowers were also painted by fairies. She wanted to have the same pink dress as the fluffy aster. And white dahlia-colored coral.

Irina tried on floral colors, having two dresses in her “wardrobe": for a holiday and for every day. Koraliki made from mountain ash. Earrings – from cherries. Brooches are made of wheat and rye spikelets. I attached them with a pin to the dress "for every day" and was "fashionable, fashionable."

Irina loved to look at the "fashionable" pages in magazines and draw scarves, shawls, and beads for models. The girl herself dressed quite modestly. Parents-collective farmers did not have extra money. And then everything became scarce. There was nothing to buy even one and a half or two meters of chintz.

Classmate Vasily courted Irina almost from the first grade. But I spent the first time home when I was eighth graders.

Oksanka was considered a fashionista. Her family "went Canada" from relatives. Therefore, Irinina’s classmate had such things that the village had not seen.

Oksanka came to the club in overseas things, looked down on her humble fellow villagers and cast loving glances at Vasily. She liked the guy. Oksanka said to her best friend: “What did Vaska find in Irina? There is nothing more than a long braid.” "Irina is a good student." “We must go to the fortune teller. Then Vaska will not look at Irina. “Oksana, what are you talking about?!” – Frightened said girlfriend.

Whether Oksana went to a fortuneteller or not is unknown, but in the spring, in her senior year, Vasily began dating her.

Irina since then began to be ashamed of her poverty. Oksanka is a fashionista. Rich. Her mother sells overseas shawls and dresses. So Vasily bought a fortune, the girl reasoned.

After graduation, Irina went to the regional center to get a job at one of the enterprises. “Baby, work hard in factories and plants. You are so skinny. Maybe you’ll change your mind? mother asked. — It would be better if I went to study at a sewing school. I would always have a "fresh" penny. And closer to home. There are several tens of kilometers in the region. And to the district center, to the school, it’s within easy reach. ” The daughter stood her ground.

Irina wanted to earn money for decent clothes, shoes, and not only for herself, but also for her younger sister. Postponed training.

A pretty girl attracted the attention of factory guys. But Irina did not think about love. The insult inflicted by Vasily hurt. Instead of dating, she ran to the library in her free time. And the dormitory watchman Aunt Tosya, who liked the modest girl, asked her neighbor Polina Aristarkhovna, a retired teacher, to help Irina with English. The girl once confessed to the watchman that she wanted to go to university.

Aunt Tosya did not like to talk about how her fifteen-year-old Tanya was returning late from a friend from a neighboring house and how she was attacked by hooligans. After that, Tanya lived a little more than a month. A few years after her daughter’s death, Aunt Tosya became a widow. She is already sixty. Sad at home. In the hostel, the watchman is not liked, because she is very strict. Try to come back after ten in the evening, or invite a guy to visit. And she just keeps the girls out of trouble.

The girls from the hostel were surprised: how Irina manages to look so good in ordinary clothes. She smiled, calling herself the "calico queen." Because there was no money for clothes made from expensive fabrics. And there was nowhere to buy them, except perhaps "from the hands."

For chintz dresses, the girl made belts, beads, weaving crocheted elements into them. She learned to combine the incongruous. I have always wondered how harmoniously multi-colored flowers look in the garden. Some colors, it seems, should "swear" with each other. And they, on the contrary, create an amazing, unusual range.

She once disliked brown because of her school uniform. Now the girl "begged" his forgiveness. I picked up “friends” for him from other colors so that brown would not look sad.

And the gray colors from "mouse" turned in Irina’s fantasies into bizarre beauty.

Irina gave corals and belts to girls from the hostel for their birthday. They wore jewelry to a date, to the movies…

Remained in the past factory, training at the university. He married Oksana Vasily. Now they are sawing each other. Irina bought a one-room apartment in Khrushchev. While working at school, tutoring, translating, I did not notice how thirty, thirty-five had passed. The younger sister got married and had a son. On weekends, Irina hurries not to her parents, but to her sister, who lives in the regional center. On the sisters, the question about personal jokes: "The fans have gone." And the mother doesn’t even ask about anything.

Christian came into her life by accident. He was confused, that is, lost, on a busy metropolitan street. The Canadian looked around helplessly. Their eyes met. He began to explain something: “sorry”, “hotel”, “street” … Irina asked in English what happened and how she could help. The man, as if seeing a kindred spirit on the other side of the world, said that he had come to the capital to establish contacts with new partners. He asked if his savior lives here. Hearing that in the West of the country, he was even more embarrassed: it was from here that the roots of his grandfather and grandmother.

… Two years after the meeting in the capital, Christian was taking his wife to Canada.

My husband liked Irina’s products. “Maybe you wanted to open your own shop?” asked.

The little shop was called "The Chintz Queen". It contains items from his native land – a few are sent by his sister. And a lot of corals, earrings, bracelets, belts made by Irina’s hands. Her shop is popular. One well-known North American store became interested in him. And the children of their acquaintances, friends, and some clients will soon exhibit their uncomplicated drawings and "adult" paintings here. Christian came up with the idea.

Irina has already figured out how she will conduct the first presentation. She will start it from the yard – asters, marigolds and other multi-colored things grow near the bench. “When the sky lights up the first morning dawn, little fairies with tiny lanterns wake up the flowers…”. These will be her first words.

Rules for choosing a wedding dress

DIY gift for a loved one

LOVE AT A DISTANCE

Vaginal orgasm and how to experience it